Late July, we took Mr. Bond (our motorhome) and Moneypenny (our little tow car) to the verdant meadows of Southern Tennessee and Kentucky… where entire fields of bluegrass and horse pastures are mowed with managed precision!

Knoxville, from Scruffy to Sleek

We really, really liked Knoxville, Tennessee! The general impression from our 4-day visit is that of a sleek, young and vibrant place, peppered with several chef-owned restaurants, micro-breweries, distilleries and cafes.

However, it would seem that its recent past was nothing but…

The 1982 World’s Fair, known as the International Energy Exposition, was held in Knoxville. There was initial skepticism expressed in the media about the ability of Knoxville, described as a “scruffy little city” by one of the national publications, to successfully host a World’s Fair. The event was nonetheless an amazing success, with

The Sunsphere, a 26-foot (81 m) steel tower, topped with a 5-story golden globe built for the World’s Fair, still stands today and has become a symbol for the city.

Following the World Fair, Knoxville embraced its ‘scruffy’ moniker for a while… Someone even pushed the slogan “Keep Knoxville Scruffy” in response to “Keep Austin Weird”, its quirky-sister city in Texas. There is still today a Scruffy City Film & Music Festival (sadly, not held in 2019 due to a lack of financial backing), and a well-attended Scruffy City Vegan Fest each October. But as much as the term “scruffy” was accurate to describe Knoxville’s once seedy bars and gritty waterfront from the 19th to mid 20th centuries, its scruffiness state just might be the polish that, in 2019, makes this city sparkle! 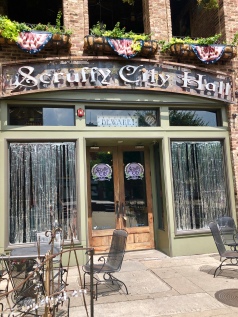 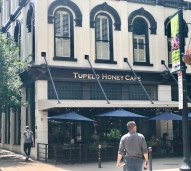 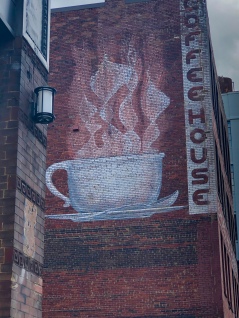 One of the main gathering place is the Market Square district located in the center of town since the 1860s. Today, the square brings people downtown for festivals, concerts and other outdoor events. This is where, in a lone corner of the park, I chatted with Larry, who sat quietly on a bench with the sign “Ask Questions to an Atheist”!!

Twice a week from May through November, the square is the site of a farmers market that provides fresh fare for shoppers and for many of the area’s local chefs — It is truly, one of the best farmers markets we’ve ever experienced!

The grandly restored Tennessee Theatre, on Gay St., (Knoxville’s main street) has achieved landmark status and brings a range of concerts and events downtown. Throughout the summer, classic popular films are shown every Friday evening. “Monty Python and The HolyGrail” was playing on the Friday we were there… and delighted to watch again while admiring the exquisite indoor architecture and beautiful design details.  Not sure how many of the (full house) patrons understood the humour but . . . 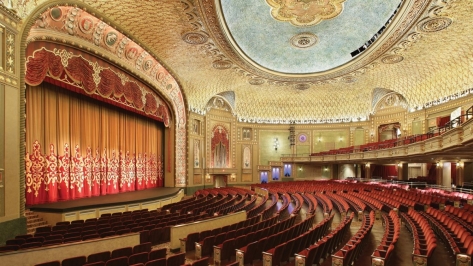 There is an off-Gay street downtown, known to as the Old City, with a colourful history that reaches to the early 19thcentury. Today the area around the old rail yards—a short stroll from the central downtown area, is promoted as the “alternative” downtown experience. Though we visited during the day, we could tell by the eclectic bars, restaurants and coffee places that it’s a popular spot, day and night! 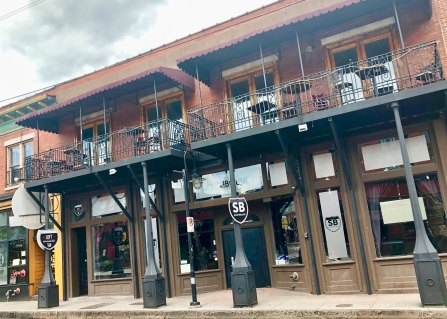 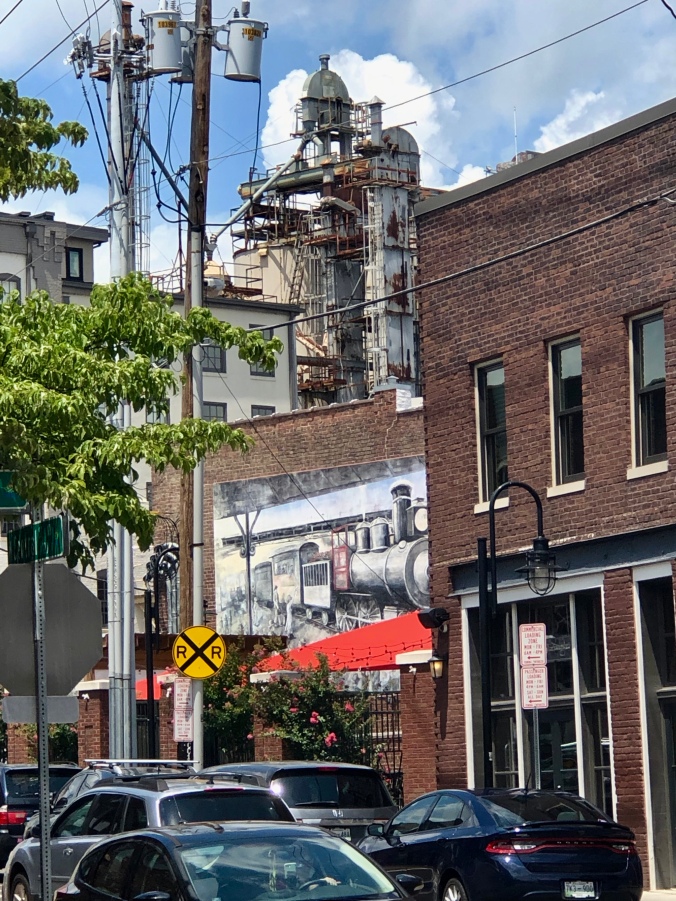 The proximity of the Great Smoky Mountains National Park less than an hour’s drive south of Knoxville is the northern entrance to the Park. To get there, we took the unfortunate route through Pigeon Forge and Gatlinburg. These, in our opinion, grosstouristy towns, in mid-July, should be avoided at all costs! Itwas (literally!)bumper to bumper traffic with tacky souvenir shops, rental go-cart courses, pet-the-bears/ride-the-camel/see-the-Jesus-show, Elvis museum, bungee jumps, you name it!! ‘Americana’ at its worse… and not a great way to access the beauty of the Smokies!

A word about the SKP Raccoon Valley RV campground where we stayed in Heiskell, near Knoxville. Every Monday, folks from both the campground and from around town gather for a bluegrass jam session. Everybody is welcome, no matter the skill level. It was a lot of fun to watch the interaction and listen to one-and-all play and sing away!

Lexington, Horse Capital of the World and “Athens of the West”!!!

Listed in National Geographic Traveler’s “50 Best Places of a Lifetime,” Kentucky’s famed Bluegrass region is not to be missed. Lexington, Horse Capital of the World, is at the heart of this region of rare beauty, but the area is dotted with charming small towns to explore and distilleries to discover. 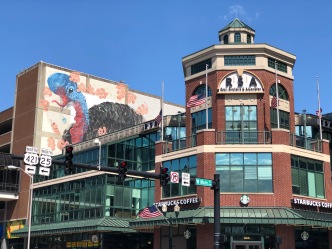 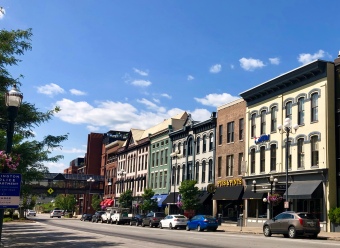 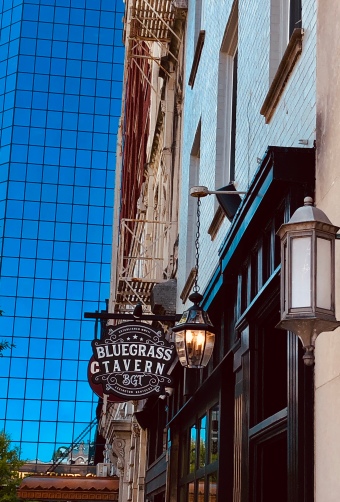 Lexington was founded in 1775, seventeen years before Kentucky became a state. By 1820, Lexington was one of the largest and wealthiest towns west of the Allegheny Mountains. So cultured was its lifestyle, the city soon gained the nickname “Athens of the West.” From our anecdotal observations of the street art alone, this moniker seems to be alive and well! 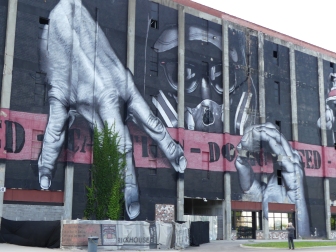 So here we were in the Horse Capital of the World! Full disclosure, we’re not ‘horse’ people. So while the attraction to stop in Lexington for a few days was not specifically equestrian-related, we took the opportunity to learn about this majestic animal while staying at the Kentucky Horse Park campground.

The Kentucky Horse Park is entirely dedicated to man’s relationship with the horse. While this description of the park may sound simplistic, the experience is quite something and the knowledge gained by both child and adult is pretty astounding! Where else can you see and pet famous retired champion racehorses or visit a Smithsonian affiliated International History of the Horse Museum! We’re no ‘experts’ by any means but we can now proudly claim the title of “serious horse aficionados”!

The Park had exquisite sculptures

These panels are quilted… superb!

One of the many huge stables

However, beside thoroughbred farms, the Bluegrass region has many attractions and points of interest to explore… Civil War sites, historic homes, folk arts & crafts, hiking, bird watching, antiques, art galleries. As with any wealthy areas (of the horseracing industry kind), the Bluegrass region is endowed with first-rate hotels and fine dining.

This is also Bourbon distillery country. During our short stay, we enjoyed touring the Woodford Reserve, located in Versailles (not ‘that’ Versailles!). From the lovely scenic route amid the rolling hills of bluegrass country to the distillery grounds, Woodford Reserve sits on Kentucky’s oldest distilling site where Elijah Pepper began crafting whiskey in 1812. Today’s distillery is home to a 500-foot-long gravity-fed barrel run, iconic copper pot stills and 100-year-old cypress wood fermenters. 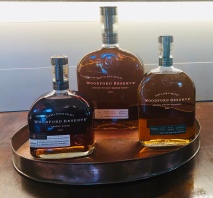 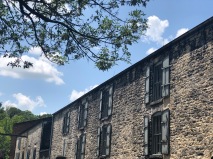 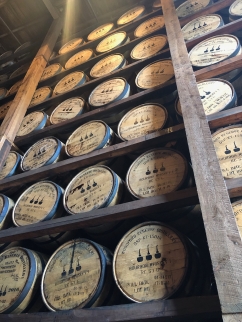 We (I) enjoyed the Bourbon, the scenery and the history! While Mark skipped on the actual tasting, we’re happy to say that we now know the difference between Scotch whiskey and Bourbon. It’s a bit of a complex thing, but the main difference is geographic: Scotch is whiskymade in Scotland, while Bourbon is whiskeymade in the USA; Scotch is made mostly from malted barley, Bourbon is distilled from corn. A whiskey may not be called Bourbon unless it’s made in the USA (usually Kentucky or Tennessee). It’s a bit like one can’t say ‘champagne’ unless it comes from the Champagne Region in France. Ah well, the irony of learning all of this from a distillery located in Versailles, KY!

Next blog: “In praise of the small towns of Indiana, Minnesota and South Dakota!”