After six weeks of downtime spent with family and friends in Seattle (with a quick trip to Toronto & Montreal for me), we left our northwest base on October 11 bound for warmer climes — with a general itinerary through Southeast Washington State, Idaho, Utah, Nevada, Arizona, leading to our final ‘winter’ destination in Desert Hot Springs, CA.

It turns out that mid-October is actually a bit late to linger too long in the northern states as nights are getting cooler (as in below freezing point) – especially this year it seems, with Montana, the Dakotas, and Alberta getting a ton of snow in late September, and early October!! Our rig has NOT been winterized—no need to do so if we can help it. So after 3 days in Walla Walla, getting acquainted with the town and its 140 wineries (well only a small number of these were visited!), we headed for quick overnight stays through Idaho and northern Utah, with a short ‘detour’ to the Moab area.

Nothing prepares you—not even the glossy photography and nature videos—to the splendors of Utah’s amazing mountains and canyons. Extremely popular especially in the summer with families, it is good enough reason (that plus the extreme heat) for us retiree-types to avoid Utah’s many National Parks between late June and Labor Day weekend. Even September is pretty busy. In fact, RV parks and hotels are in “high season” right through October 31st, which means that accommodation costs are high until November. Consequently, the window of time to explore these vast regions is fairly narrow as even BLM (Bureau of Land Management) boondocking spots get busy.

In spite of the late season and colder nights, we took time to explore two specific areas—Green Valley/San Rafael Swell and Moab’s Arches National Park. In other words, our kind of Disneyland!

Our drive to Moab included a couple of night stop in Green River. While the town of Green River has an almost ghost-like appearance, its location at the confluence of the Green and Colorado Rivers is the real appeal. 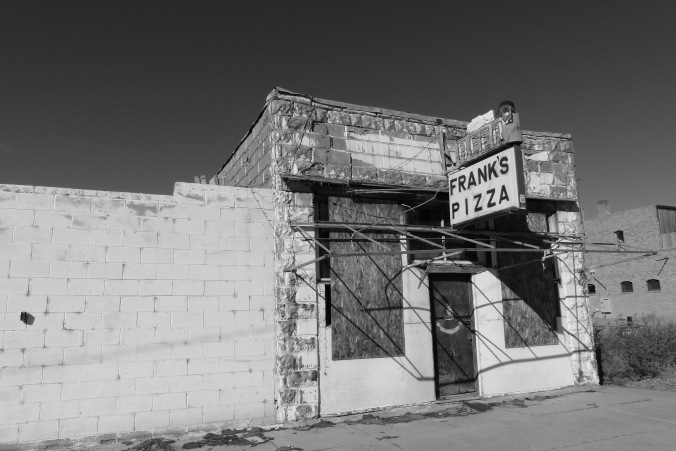 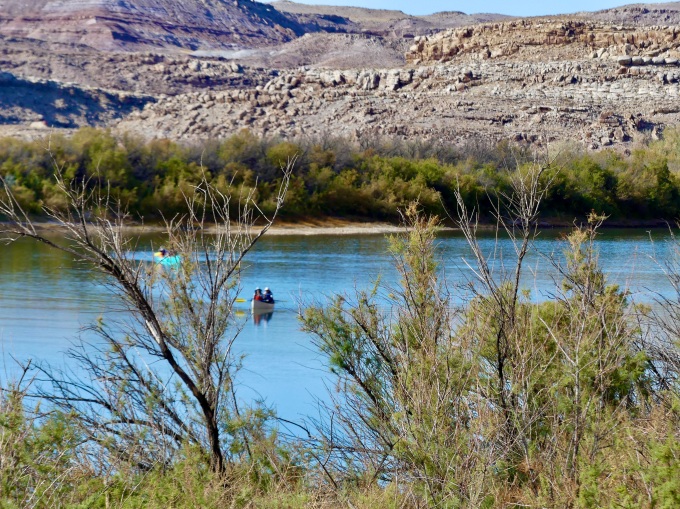 Green River is right off Interstate 70—that highway eventually reaches Denver, CO and goes on all the way to Maryland. Built in the 1970s, I-70 goes through the San Rafael Swell, literally cutting through the Reef, a gigantic 30-mile barrier sandstone wall. It is a feat of road engineering! To date, I-70 has the longest distance anywhere in the Interstate Highway System with no motorist services, about 100 miles (160 km). So best make sure to have a full tank when you get started (all-electric vehicles be advised)! 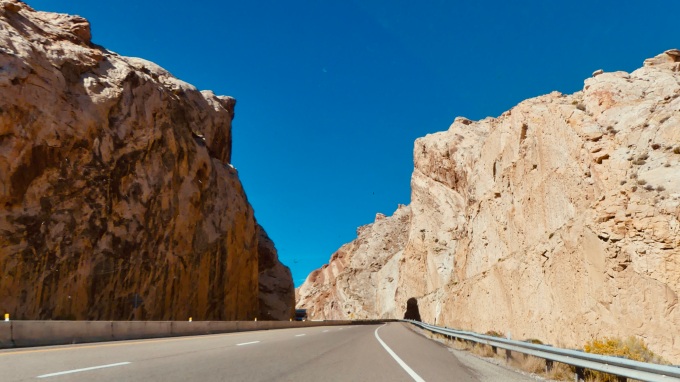 Our stop at Green River allowed us to leave Mr. Bond at the campground site and go back on I-70 with Moneypenny (the KIA) to explore at a slower pace by stopping at the many rest stops along the San Rafael Reef. As it often is with awesome landscapes, the experience quickly becomes a spiritual one where one realizes the power of nature but also its fragility given what we humans are doing to this planet. 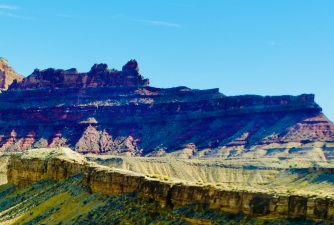 We then trekked to Crystal Geyser, about 20-mile off road located on the shores of Green River, hoping to see it in action – which it was! That was lucky as we had read that over time, it erupts only once or twice a day! 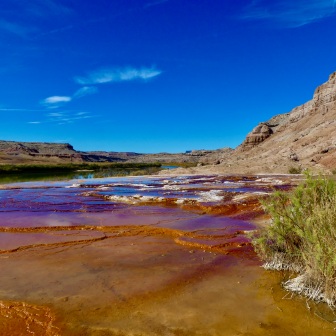 The city of Moab lies just south of the Colorado River, at an elevation of 4,025 feet

In the 1950’s Moab was nicknamed “Uranium Capital of the World” after rich deposits of uranium ore were found south of the city. The discovery coincided with the era of nuclear power in the United States, and thus Moab’s boom years began in earnest. However, with the winding down of the Cold War, Moab’s uranium boom was over and the city’s population drastically declined.

Since the 1970s, tourism has played an increasing role in the local economy, partly due to Hollywood director John Ford’s movies (the movie Wagon Master was shot in Moab), partly due to magazine articles. The area has become a favorite for photographers (can’t see why!!), rafters, hikers, rock climbers, mountain bikers, off-roaders (every other vehicle is an off-road Jeep or desert ATV). Extreme sports like BASE jumping (crazy dudes who parachute off high elevations into bottoms of canyons) as well as highlining (look it up on Google…It’s absolutely crazy!) are allowed in the area.

In recent years, publications like Sunset Magazine listed Moab as one of the “20 best small towns in the West”. Moab is experiencing a surge of second-home owners (evidence of this was all over various condo-type development sites under construction across town).

I found Moab to be a touristy-but-still-genuine place where locals are friendly and easily mingle with visitors—at least that has been our experience at a local brewery. Food was good and reasonably priced and everyone around the bar where we were sitting talked to everyone else. Much like a ski area before it starts referring to itself as a “quaint resort town” (unlike places like Aspen or Vail in Colorado). Unfortunately, I’m afraid though that it is well underway to getting to that level, which will exclude local low and middle-income residents.

I will let our images do the talking on Arches National Park. Suffice it to say that driving and hiking in Arches was such a privilege… there is such beauty at every turn…you can’t quite catch your breath before the next amazing sight!

There are more than 2,000 natural sandstone arches in the park, including the well-known Delicate Arch (see picture below), as well as a variety of unique geological formations. The park contains the highest density of natural arches in the world.

One of the most famous arches… the Delicate Arch

We encountered a family of mule deer way too busy eating delicious red leaves (sorry, don’t know what kind) to take notice all the camera clicking away six feet away!

We could easily have spent a month in the Moab area alone.  Something tells me we will return… after all, the mountains aren’t going anywhere, they’ll likely be there for another couple of million years! 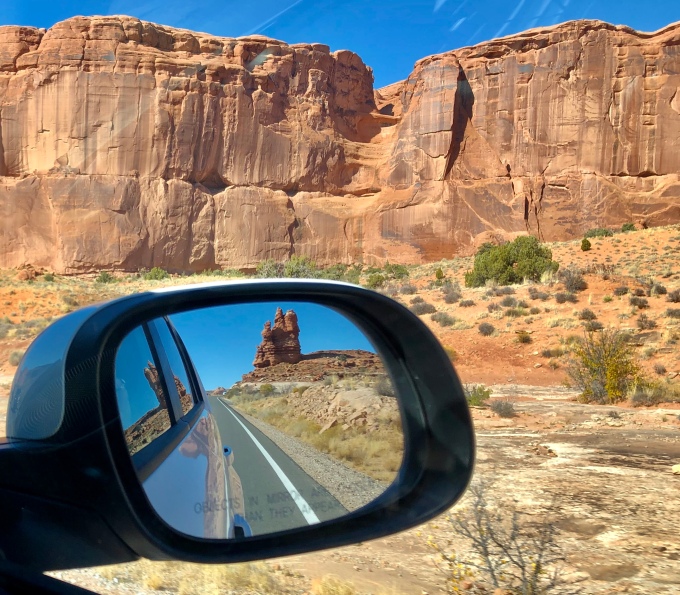 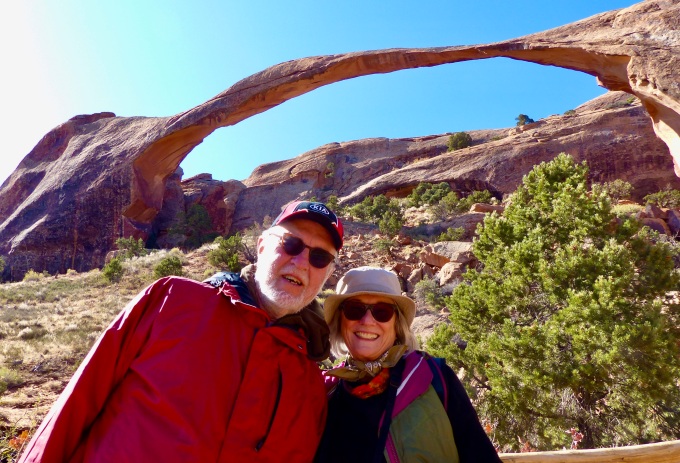