Back in late October, in an effort to escape the weather—way-too-early-in-the-season, below freezing nights in Utah and just about everywhere else north of there—we found ourselves ‘escaping’ to Las Vegas for a week. Both of us had been to Sin City before, on numerous occasions—but on those visits we hadn’t strayed too from the Strip. So this time around, we challenged ourselves to discover interesting and fun things to do beyond the limelight. The distant silhouette of The Strip at dusk would be the closest we’d get to it.

So the challenge was on, but what exactly you may ask was there to do around Las Vegas with a small car (Moneypenny!), camera and hiking boots? Well, it turns out… plenty!

We started by looking at a map (I know… duh!) and see what’s around Vegas. 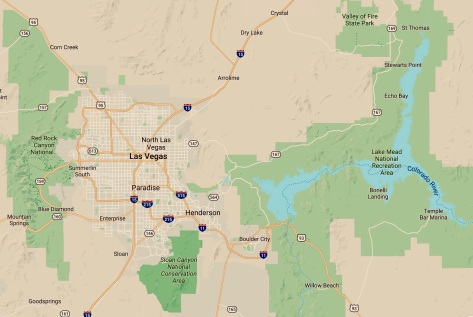 There sure was a lot of green around for a barren city in the desert!

We were definitely on to something…

The Vegas area is in Clark County. It is blessed with no less than 20 official wilderness areas that are part of the National Wilderness Preservation System.  A lot of early-to-recent American history lurks behind its mountains, desert lands and river ecosystems. The majestic Colorado River forms the county’s southeastern boundary, with the Hoover Dam forming Lake Mead reservoir along much of its length.

With that in mind, it seems fitting to begin the week with the engineering feat that is Hoover Dam.

I had made a very brief visit to Hoover Dam in 2007 during a road trip to the Grand Canyon from Las Vegas with my brother Pierre. Towering over Hoover Dam, the Mike O’Callaghan-Pat Tillman Memorial Bridge, completed in 2010, was under construction at the time; as a result, traffic was horrendous and regrettably tarnished the experience.

This time around was different — it was quite simply awesome, in the true sense of the word. 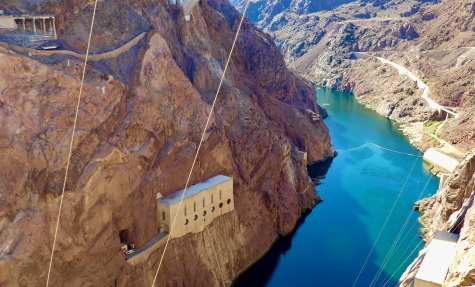 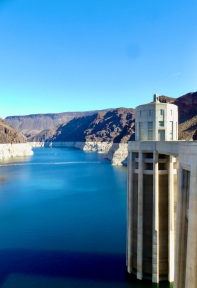 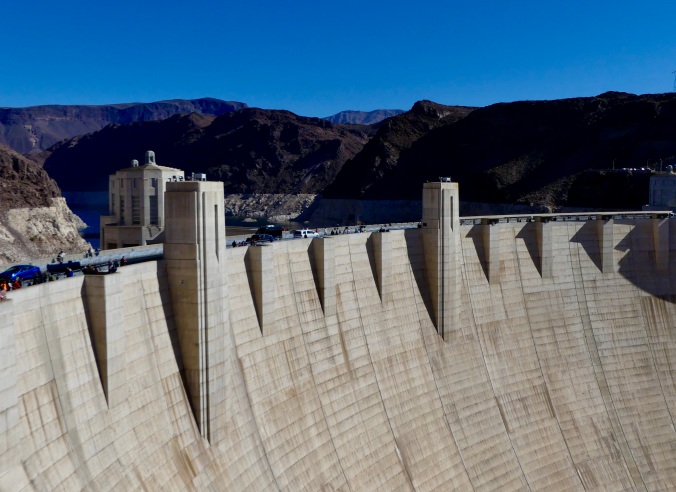 We booked a tour of the Powerplant and walked the grounds snapping lots of pictures, all the while admiring the nineteen thirties Art Deco architecture which gives Hoover Dam a nostalgic sort of look, akin to a Hollywood set rather than a utilitarian power plant. 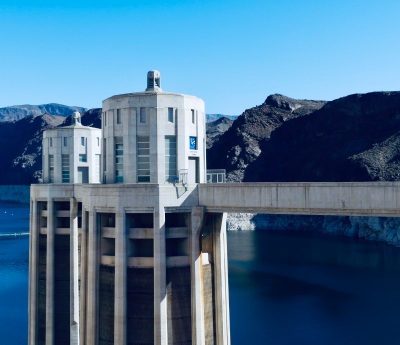 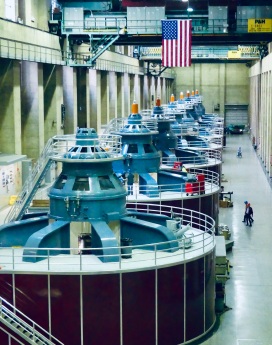 *History capsule*  Managed by the US Department of the Interior, the Hoover Dam straddles the border between Nevada and Arizona, blocking the Colorado River to create Lake Mead, a large recreation area that stretches 110 miles upriver. The Dam was constructed between 1931 and 1936 during the Great Depression and was dedicated on September 30, 1935, by President Franklin D. Roosevelt. This grand project was originally designed to stop devastating floods along the lower Colorado River as well as to provide water and electrical power to surrounding states.  There are 7 Colorado River Basin states: Arizona, California, Colorado, Nevada, New Mexico, Utah, and Wyoming. Each state is party to the Colorado River Compact decreed in November 24, 1922.

As you might expect, with such precious hydro power at stake to be ‘shared’ among so many, things didn’t always go smoothly over the years, with states battling in court on their apportionments. As late as 1964, after a lengthy court battle that began in 1952, the United States Supreme Court determined how the waters on the Lower Basis should be divided, issuing a decree that of the first 7,500,000 acre-feet of mainstem water in the Lower Basin, California is entitled to 4,400,000 acre feet, Arizona 2,800,000 acre-feet, and Nevada, 300,000 acre-feet and so on.

Thanks to Hoover Dam, the neon lights of Vegas, Los Angeles and so many others will continue to shine for a very long time! 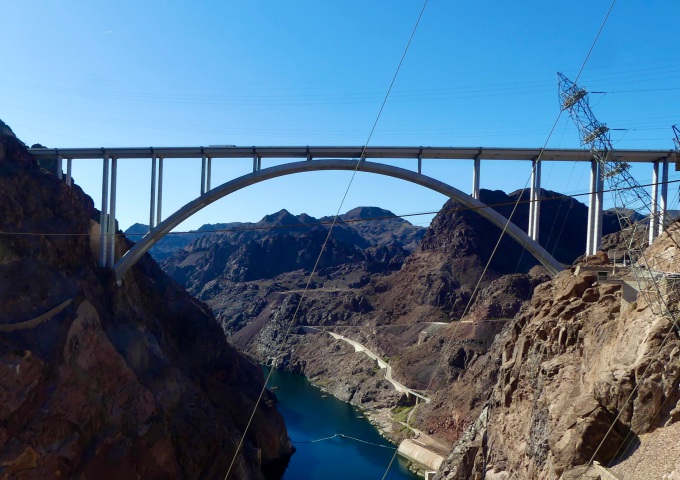 Lake Mead is America’s first and largest national recreation area. It’s the largest ‘green’ area on the above posted map. Located a mere 12 miles outside of Las Vegas, Lake Mead’s brilliant blue waters beckon. The reservoir spreads across 1.5 million acres of canyons, valleys and include one additional lake, Lake Mojave. On summer weekends, Nevadans escape the heat to these lakes with boats of all kinds, waterskis and fishing rods! 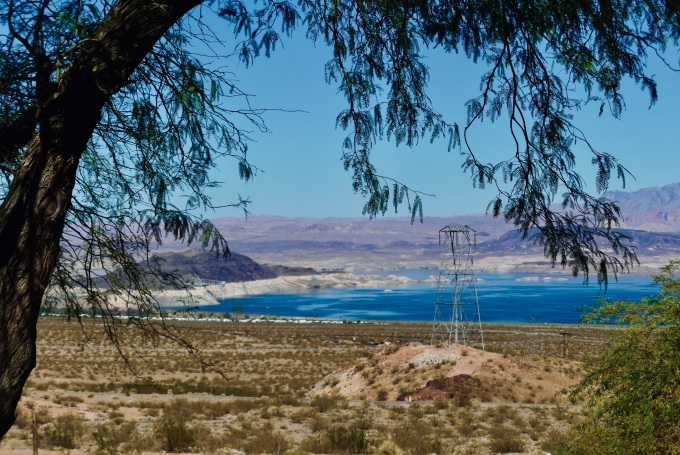 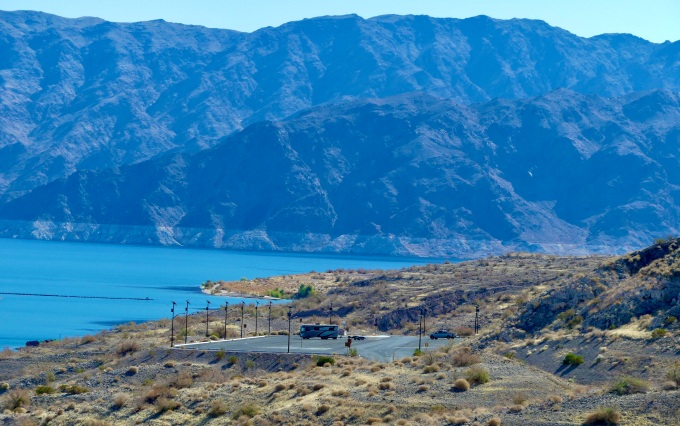 We began our scenic road trip of Lake Mead National Recreation Area on the South shore of Boulder Basin where vast panoramic views of the lake set against a background of colourful rugged mountains. The road then leads through areas of deep red boulders and rock formations. We stopped for a picnic lunch at the Redstone Dune Trail. 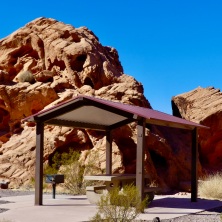 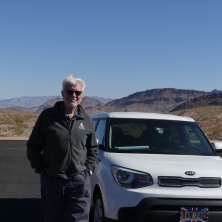 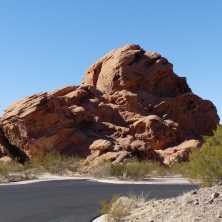 The Lake Mead Trail ends as we pushed north on the return portion of this loop in the direction of the Valley of Fire State Park. Once we paid our $10 entrance fee to the park, we entered an enchanted land of 40,000 acres of bright red sandstone outcrops nestled in gray/tan limestone. 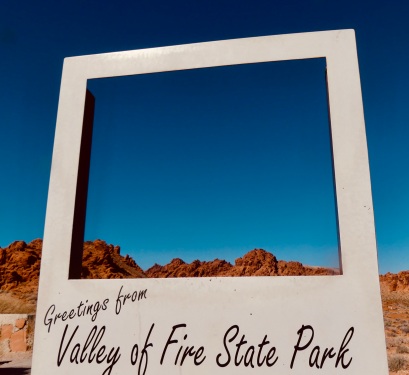 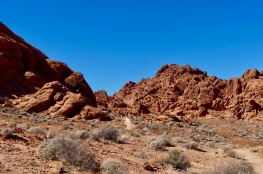 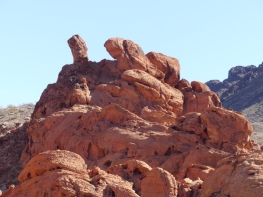 Valley of Fire contains petrified trees and petroglyphs dating back more than 2,500 years, carved by the Basketmaker people, followed later by the Early Pueblo culture. There is an excellent Visitor Center—the only criticism perhaps is that it tries to insert way too much information in their small exhibit space making it a bit bewildering to absorb it all!

One quirky note… The park also hosts an Annual Atlati Competition in which  participants test their skills with replicas of the “atlatl”, a dart throwing weapon used by prehistoric hunters that is represented in ancient petroglyphs at the park.  Worth a quick YouTube search!

Day 3: City of Henderson and the Henderson Bird Viewing Preserve

Southeast of Vegas is the suburb municipality of Henderson where we established residence at a local campground for the week. The city spans the entire Las Vegas Valley, and interestingly enough, was ranked second in Forbes’ list of “America’s Safest Cities” in 2011. We loved its south central location that included our favourite supermarkets such as Trader Joe’s and Whole Foods, as well as decent restaurants (and of course plenty of Starbucks for Mark’s coffee addiction! Henderson has a mix of planned residential developments that are very well appointed indeed, something we didn’t really expect to find.

The Henderson Bird Viewing Preserve was located just a couple of miles from our home-base, so it was an easy destination. Open 7 days a week, from 6 am to 2 pm, it is Nevada’s only scenic Bird Preserve and it is huge… literally an oasis in the middle of industrial zoned desert lands.

It was a strange experience to walk in this vast Preserve, watching the likes of great blue herons and Gambel’s quails and so many other waterfowl birds, against the backdrop of nearby downtown Las Vegas. 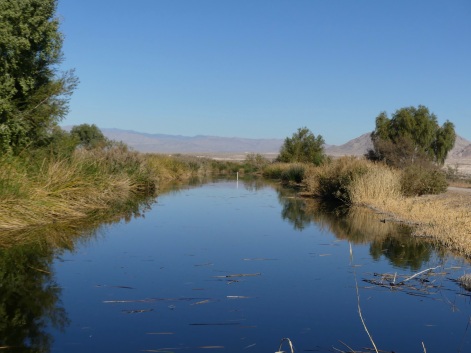 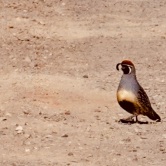 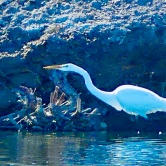 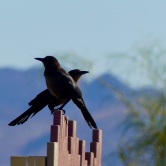 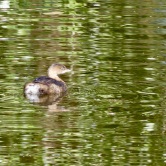 Some 17 miles south of Vegas is Sloan Canyon National Conservation Area. The centerpiece of the area is the Sloan Petroglyph Site, listed on the National Register of Historic Places. The sites have been called the Sistine Chapel of Native American Rock Art due to their size and significance. Archeologists believe the more than 300 rock art panels with 1,700 individual design elements were created by native cultures from the Archaic era, taken to be from around 8500 to 3000 BCE. 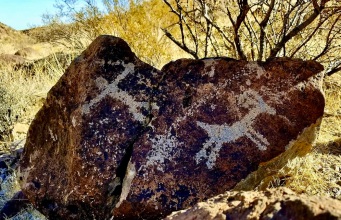 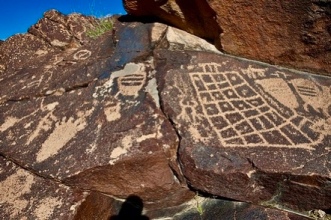 Administered by the Bureau of Land Management (BLM), Sloan Canyon park has a policy of not publicizing the exact location of the petroglyphs due to unfortunate recent problems with vandalism. To complicate matters, access to Sloan Canyon is further hampered by the rapid development of private land for residential development.

There is a small visitor centre located in a temporary(?) mobile structure at the foot of the mountain where we picked up the trailhead map to the Petroglyph Site.

At 4.2 mi/6.75 km round trip in a demanding terrain (elevation of 3,000+ ft/915+ m), the trail was beyond our current physical capabilities, so we contented ourselves to hiking the first half. While we may have missed the ‘best’ representation of the panels, the petroglyphs we did see were quite amazing indeed!

We said goodbye to Las Vegas/Henderson, energized by our newly acquired knowledge of the area, its natural beauty… with both of us a bit more physically fit than we first arrived! Who knew Vegas could be so ‘naturally’ invigorating!